The Socialist Republic of Vietnam is a stretch of land in S-Letter shape. Being located in the center of the Southeast Asian Region, and the Eastern part of the Indochina peninsula, Vietnam shares its borders with China to the North, Laos, Cambodia to the West, and the East Sea – Pacific to the East and South.

Three-quarters of Vietnam’s territory is made up of hilly and mountainous regions. It has two major deltas, the first one is the Red River Delta, the early settlement region of ancient Viet people and either cradle of the wet rice civilization, the second one is the Mekong Delta – the biggest rice-growing area of Vietnam. There are thousands of large and small rivers in Vietnam, but only the two biggest river systems – the Red River in the North and the Mekong (or Cuu Long) river in the South are the most important.

Vietnam has a 3,260 km coastline with such nice beaches as Tra Co, Sam Son, Lang Co, Non Nuoc, Nha Trang, Vung Tau, Ha Tien, Phu Quoc… In some places, the mountains reach far to the sea, creating fantastic beauty like Ha Long Bay, which was listed by UNESCO as the World Heritage Site. 0ffshore in Vietnam’s sea area are thousands of islands and islets, scattering from North to South, among these are the two archipelagoes Hoang Sa (Paracel) and Truong Sa (Spratly).

Vietnam is situated in the sub-tropical and tropical area having monsoon, abundant sunshine, rainfalls, and high humidity. At some high places in the tropic zone or in the high mountainous areas, the climate is rather similar to the temperate one. In general, there are two seasons in Vietnam: the dry cold (from November to the next April) and the rainy and hot one (from May to October). 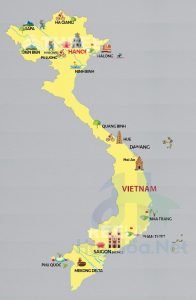