Quan ho Bac Ninh folk song is a form of love singing between brothers and sisters. This is one of the typical folk songs of the Red River Delta. Quan Ho Bac Ninh folk song was inscribed in 2009 on the Representative List of the Intangible Cultural Heritage of Humanity

The brothers in traditional costumes of turbans and blouses and the charming sisters in tangled, tangled clothes, wearing hats with basket straps, sang together to the rustic, loving verses, the way of singing. In the traditional way, there is no need for accompaniment but still full of music, showing the delicate culture of Quan ho singers.

For the Bac Ninh people, festivals not only allow them to highlight their own village’s specialties, such as ceramics, folk painting, wrestling, kite parades, or bird contest, among a great many other things, but also their common prized heritage, the Quan ho singing tradition. 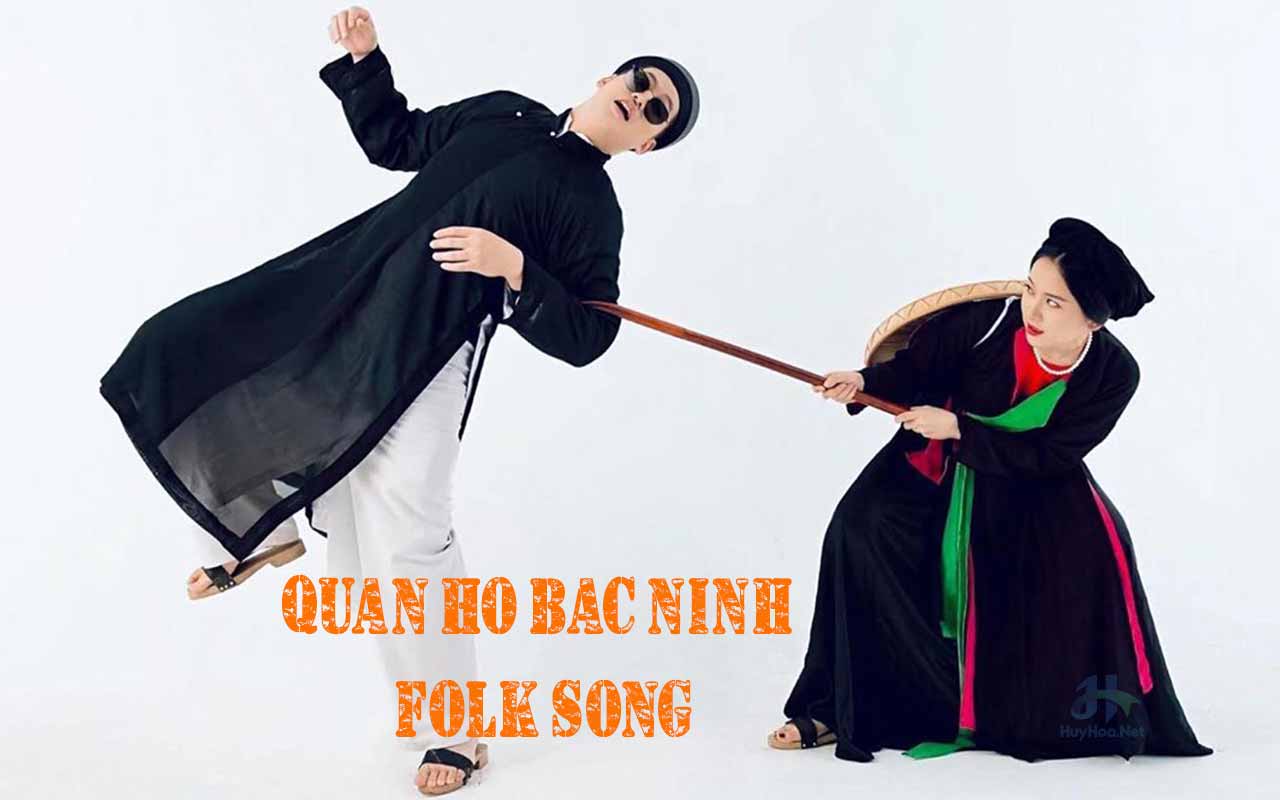 Ca Quan ho, also called Quan ho Bac Ninh singing, originated around the 13th century, and has traditionally been associated with the spring festivals that follow the celebration of the Vietnamese New Year. According to the tradition, only young people used to sing Quan ho songs, as the major body of song texts centers on the subject of love and sentimental desire among young adults. Nowadays, many elderly singers participate in the singing as well in response to the Quan ho movement initiated by the provincial government. Originally, Quan ho singing was an exchange of songs between two mandarins’ families. Gradually, it spread out and became popular among the northern people. Groups were formed just for singing, and many marriages were formed at these get-togethers. After centuries, it became the most significant Vietnamese folk song type.

The brothers often wear silk shirts, blouses, shorts, turbans; The sisters immediately wore a seven-piece dress, a four-piece dress with many purple things, a peach bib with a split swallow, a peach flower belt, a lily flower belt, and a gold cross. When singing outdoors, men often cover their umbrellas while women cover their hats with baskets to add grace and courtesy.

Unlike the simple lullabies, which were inspired by daily works, Quan ho was always searching for new content and new reforms. Virtually, all songs heard in festivals express personal subjects like addressing the beautiful nature and the satisfaction after harvesting crops together. Love in Quan ho is not sad and pessimistic as it is in lullabies (ru) or in calls (hò). On the contrary, the tune of this type is rich in tunes and rhythms because it received all the influences of lullabies, poem recitation, etc.

There are four major breaths of air in Quan ho singing:

If you did listen or watch a Quan ho performance, you will see that it is an antiphonal singing tradition in which men and women take turns singing in a challenge-and-response fashion drawing on a known repertoire of melodies. In general, an initial “challenge phrase” (câu ra) is sung by a pair of female singers, followed by a “matching phrase” (câu đối) from the men, which repeat the melody of the challenge phrase. Once the order is reversed, the men will issue their own challenge phrase with a different melody.

One of the Quan ho features that have endured through time is the proper verbal and poetic introduction to every tune. Quan ho singers are not only appreciated for their singing ability, but also for their skill in leaving an impression of their gracefulness and literary adeptness on the audience. Usually, one of the singers will say something to praise the opposing pair and express how fortunate her/his pair has been to be allowed to sing with them before reciting the verses of the song. Not only provides listeners with the basic content of the song, but the rhetoric used in the introduction also contributes to creating the impression of a theatrical act.

The singers also imitated the musical sound, the sound of rice grinding, crying as well as replying to the tunes that their opposing pair had used. The singing ends with songs in the farewell category- a feature that has never been changed as a sense of completion.

Instrumental accompaniment is welcomed by Quan ho singers in some villages. The monochord is the most common instrument, followed by the bamboo flute and the 36-stringed hammered dulcimer.

Trying to make cultural sense of the Quan ho tradition as it is practiced today is not an easy task. Quant ho singing has undergone several changes with regard both to its context and content as its practitioners continue to search for ways to put the puzzle together while realizing that missing pieces may never be found. Yet, the Bac Ninh locals believe that Quan ho singing has always been the window through which outside people can see who they really are- the director of the Quan ho troupe maintains.

If you want to hear of them directly, you can of Lim on 13 January every year according to the lunar calendar in Tien Du district, Bac Ninh province. With popular games such as champion, wrestling, chess struggle, enough money, and weaving, cooking rice.

Lim of the Association is a heaven of sound, poetry, and music space to the thought of fermentation. The new seven new clothes, the three important hats, fringe hanging at both sides of a conical hat, silk camisole range of gravel, composed of six cells, turban, shirt pairs of Gam … as containing all the hidden spring of life of people and create things. How’s the game of their regional Lim also is a unique game, each gesture has to communicate it in a shade higher culture. The Lim always leaves in the heart of what a beautiful area lam. Cac old man Lim, Lim said that Vietnam is still conservation of Lim’s past, but alternating the mark of the cultural market. Lim who still sings them on the hills and under the boat Lim, but singing with a microphone through a broadcaster. Space is no longer grace the “cramped” in a limited space for both the song galaxy, all of heaven, and hear the spring.