Hang Trong painting has long been known as one of the famous folk paintings of the Vietnamese nation. Paintings are produced at Hang Trong, Hang Non, and Hang Quat streets of Tho Xuong district, Hanoi.

Since ancient times, the paintings sold here were drawn by talented local artists. After that, a number of artists from different places came to paint and produce pictures.

Therefore, this type of painting is also known by famous names such as Phuc Binh, Vinh Loi, and Thanh An.

Hang Trong Painting is not the same as Dong Ho Painting or Kim Hoang Painting. The type of paper used is long, wide, and smooth paper so that artists can easily draw pictures.

Formerly, this line of products and for sale at Hang Trong street. Every day and every fan under total Tieu Tuc (the change is Thuan My), Tho Xuong district (now the Hoan Kiem district, Hanoi) near Hàng Nón, Hàng Hòm, Hàng Quạt street where specialize handicrafts as worship pictures, drum, fan, parasol, flags.

Let’s learn about Hang Trong paintings, one of the most famous paintings in modern Vietnam.

Along with the local population long, also painter and carver of flowers from other places to be a home for rent in home workshops.

By traders to compete, often in the name attached as Thanh An, Vinh Loi, Binh Phuc …

Unlike Dong Ho painting, the technology of Hang Trong painting combines features from the wood carving, with the colored product by hand, using pen scanner products in water, always make the bold move of insipid fine.

Along with the topics reflecting routine activities or illustrations of ancient, Hang Trong picture excess of worship can prevent, affect, Taoism and Buddhism with the relatively simple but elaborately shown, not lacking in the prestige of meaningful protection. 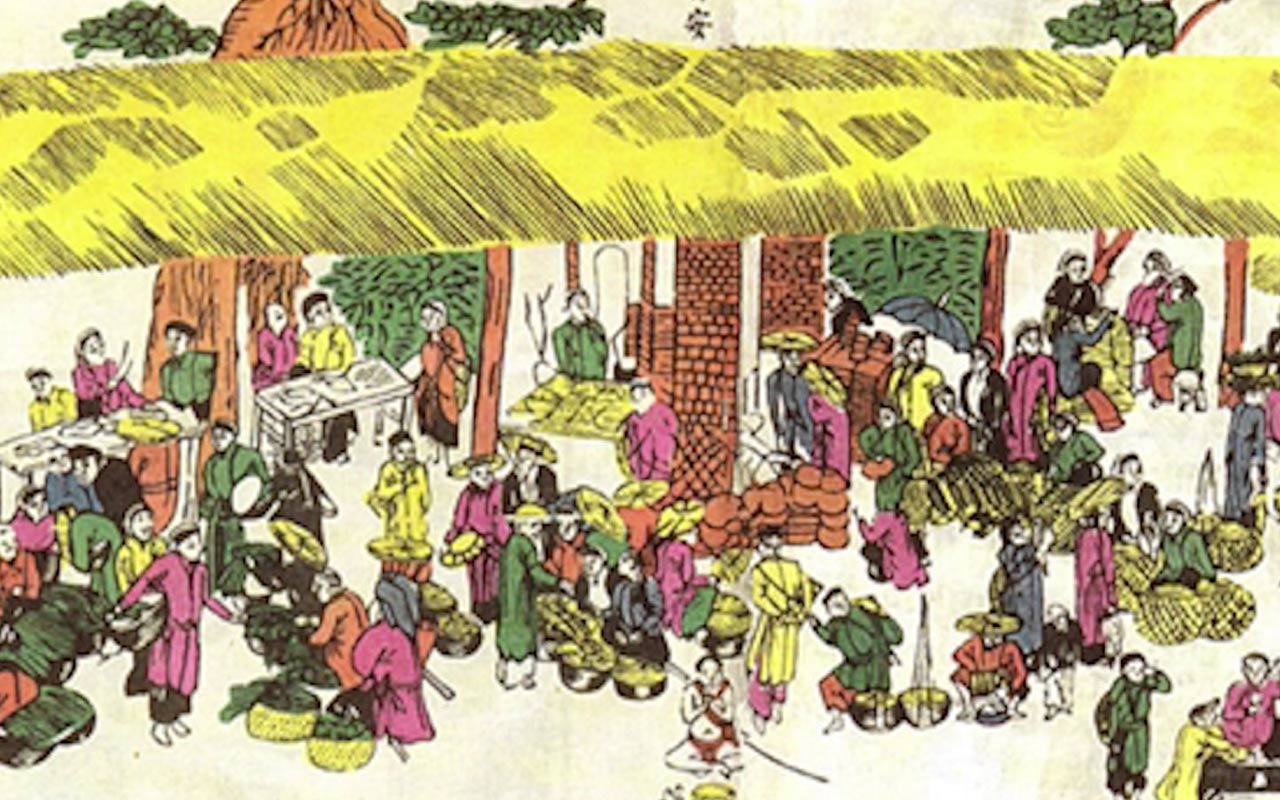 The appearance of the home goods look like “chicken out”, “naked subjects” ( “entrance gate”) in the capital city, from the same home to the people, have been Hoang Si Khai, as a poet of the Mac dynasty (late 16 century) referred to.

Thus, in the Hang Trong picture probably born with Dong Ho painting, the family of Nguyen Dang production transferred to the twenty, or about five hundred years.

In the carving in the home, goods are kept, there is some good special value, save in the History Museum in Hanoi under the symbol ABC I.5484.

The upright heartwood is carved on both sides, the subject of withdrawal from the Buddha or of Vietnamese legend, China included the old site, which is positive in the 1823 calendar.

The board is carved ago was fresh two hundred years, so we have a basis that the Hang Trong appears in the earlier lot.

“The Carp looks to the moon” – Cá Chép trông trăng

In three of the top lines of Dong Ho (Bac Ninh), Kim Hoang (Ha Tay), and Hang Trong, the Hang Trong picture is the central picture as the second largest, just after.

However, time seems to have been busy most remote. Now, where the only surviving unique artisans of the Le Dinh Nghien in Cua Dong Street, Hanoi.

To find the Hang Trong picture to go to temples, shrines, sanctuaries, or look in the private individual collections and museum Vietnam, as in many countries.

Five tigers picture is considered to be large and almost kept the beautiful purity of Hang Trong’s style now in the village of Kim Lien Pagoda.

Search for home designs in the past

Inexpensive raw materials, water room and how people of each region decide the nature and style of the product where it?

One researcher’s comment Every home in the style, concept, and methods necessarily prevent watches and Kim Hoang.

Border in sharpness and color are used in the wood carving. Kim Hoang added a fifth stage: in a black border line again, it’s bold and clear.

Le Dinh Nghien artists said about Hang Trong pictures only print black frame features in images with board and other steps are drawing by hand.

First, artisan sets turn upward carved boats, used brush ink trains are scanned to downgrade. Set up paper downgrade, use loofah remove all the back paper. The exploitation of the picture is not colored.

When the ink dry feature, use the pencil drawings turn the color flat-panel array on the template file.

In the Hang Trong picture, only phases in image sharpness are a series.

Phases also pooh color as the individual competition, sometimes more creative than the form, depending on the pen and the ability of the capital site.

Some artists also draw straight patterns and colors. In curved lines, they use color pencil dots to bowl to each array bold.

Many people are not used to wood carving. According to the professional habits, hold pen drawing directly onto the street lines, then from color to the picture complete.

Even, the home mechanic Hang Trong sometimes boring on the demand of customer wealth. Own line of Hang Trong is giving greater flexibility, more color appeased.

Customers buy Hang Trong pictures in many kinds but the main of them are market people, wards, temples, homes.

Mr. Nghien, the third of a family tradition that has made a home in Binh Vong village, Thuong Tin (Ha Tay now in Hanoi), but up in Hang Trong.

To Nghien’s life, have seven brothers and sisters, in his career he was under. “The State also look far in the forest. In 1972, Fine Arts Museum Vietnam invited me to a read-only request: picture restoration Hang Trong stored at the museum.”

He alone of the few off the top of each line picture? “Painting stock too big swallow much for the cheap but so few people trading sites said something to the collection. Also, as the site where now there is a market where home sales as before.

Consignation is difficult, order to do. “Listening to this month’s treatment, do not have in the end.

This industry is valuable but a hundred thousand a silver in the art should also too cheap” – he adds.

Before, Xunhasaba find out first in Eastern Europe and many of the contracts. People do go hang start, elaborate training, and career opportunity to transmit.

Mr. Nghien has two sons by him, but “he does not have a career, perhaps because of the economy”. Now the fate of the home, the fate of traditional villages, extending the traditional technology is still market economy challenges …

Hang Trong paintings are usually divided into two types: worship paintings and Tet paintings. Here are some of the common topics of these two genres such as: 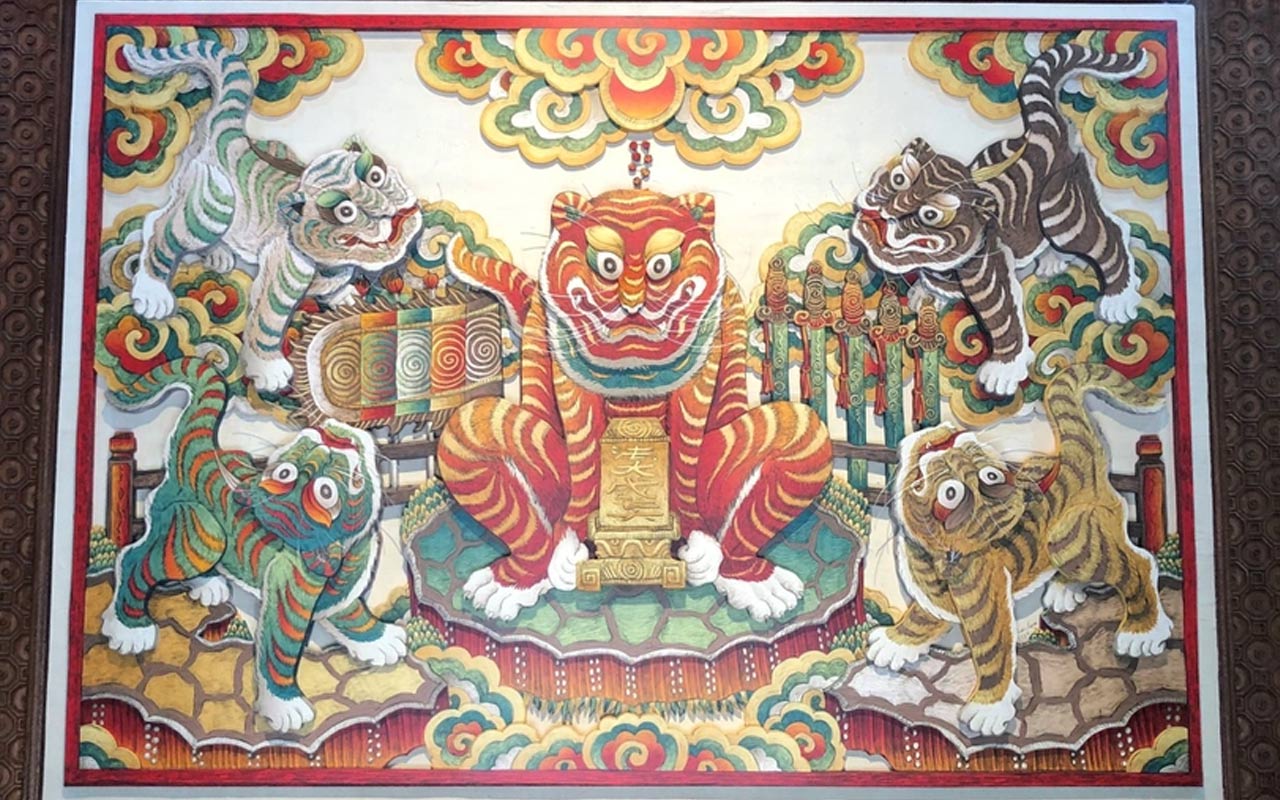 Ngu Ho painting is a typical work of Hang Trong painting which is depicted through the image of 5 tigers.

Each tiger shows a different appearance such as sitting, standing, etc., clearly engraved with the tiger’s style and vitality with a well-balanced layout.

Most of the paintings are woodcut and printed on paper with light and dark colors such as blue, white, yellow, black, and red. These are also the 5 symbolic colors in the Five Elements of feng shui. The tigers are beautifully depicted, gracefully creating movement in a unique way.

The image of Guan Yin Buddha is often depicted sitting cross-legged on a lotus platform with a brilliant aura. The subtle array of colors in the morning and at night help to express the fanciful atmosphere, the fairy shows the heart towards the source.

The painting “Carp crossing the dance floor” is a folk painting that is loved by many people because of its beauty and meaning, symbolizing the aspiration of people to rise up in life.

Therefore, many people often hang decorations for the office and living room of their family to wish for peace, luck, and prosperity. Besides, this is also the type of painting that is used a lot in Tet decoration in offices and companies.

The painting “Four quarters and four seasons” is a model of Hang Trong painting that is often chosen to display indoors on Tet holidays.

Besides, these trees also symbolize the beauty and noble character of people.

In the Chinese concept, Mai and Truc are symbols of the uprightness and integrity of people.

Besides, the pine tree is a symbol of strong growth and full of vitality as the spirit of overcoming difficulties of people.

Many people say to open classes to maintain professional communication sources for Hang Trong at the Art Museum.