Over years, the Ao Dai – aka Oriental Robe has long gradually become a special page for your own Vietnamese. Points over a period are considered the “mark” in the process of formation and development of an Ao Dai. Ao Dai is not only considered a traditional dress of Vietnamese women but it is also considered as one of the symbols of Vietnam.

In the “Nouvelle Relation de la Mission des Peres de la Compagnie de Jesus au Royaume de la Cochinchine”, published in 1631 in Lille, clerk Borri has described how the dress of the Vietnamese in the early 17th century: “The I wear a six-year-long coat, other shirts, the clothes on the other, each a color … the waist a few layers of clothing are cut out into a long strip. When traveling, the rights to this range in beautiful eyes … Men also wear a five, six long silk clothing layers to long hair … and the problems as women.

”Perhaps the clerk Borri have misunderstandings about the number of ancient Vietnamese people wear when going outside. In fact, some of the clothes are cut into long strips below the waist Borri clerk mentioned that the only lotus skirt, which the past before default waist or under the back long shirt outside. The skirt has three or four classes on silk strips overlapping each other. Classes in the same range of the longest and the shortest of the time.

Ngoc Nu statue 17 centuries from the Dau pagoda in Thuan Thanh, Bac Ninh province, is a clear proof for the Oriental robe, the lotus ribbon, and how the roll towel that Borri had seen items from four centuries before here.

The year 1819, the dress of people still like clerk Borri seen in Quang Thuan from more than two centuries earlier with a black silk shirt and long may the person to my ankle.

Until the beginning of the 20th century, most women’s long shirt cities may have in the can body, or in us. All clothing before and after the two have our phases together along with life clothing. Add to Ta is the fifth to the right, in the first. May sleeve connecting elbow below for all kinds of cloth woven only on the past is 40cm wide. The neck, hands, and the upper part of the body usually hug the people, and the lap of dress spread slope to fringe and does not fit the waist. Fringe sew sag down, large flap, the average is 80cm.

High neck only about 2 – 3cm. In the North of the years 1910 – 1920, women may prefer to add secondary defects of 3cm to the right neck and set the way the recommendations here. Neck so will expose the more attractive and to show hot jewelry chain wrap around the neck more. Most clothes are long past may double, which is available online classes. Classes in the same clothes greaseproof people may be so with the white cloth to be not only afraid of color, easy to wash.

Wear a shirt with double a clothing line in the application has a set of three new shirts. Mexico maybe just wide, with the correct low. In the past, most Vietnamese women from the North are to wear long clothing, while women from Hue were important popular again. Especially the degree in Hue or wear pants fit three types, that is along the two edges are outside the May threefold, to when people will travel more wide unfold.

In the 1930s and 1940s, the Oriental robe may still not change much, the fringe of dress are often long on ankle about 20cm, often wearing pants with white or black.

Some fashion designers for oriental robes started to appear in this stage, but they almost put the extension between life clothing, fabrics for the textile western part of the larger. The sleeve may still be connected. Best known is the time saw the Cat Tuong tailor, in Hang Da street Hanoi. In 1939 this tailer created the template a launch this guise he was long in Europe.

Le Mur product remains the same length of the shirt may not billow below. But neck bore heart shape. May be attached to clothing little girl and a bow in front of the neck. Clothes shoulder may balloon, connected in some hands. Buttonhole on the garment along the shoulder and ribs on the right. But this model exists only to about the year 1943. Years to about 1950, long shirt ribs start may have a waist. The mechanic may then smart cut shirt by eel body.

Body shirt after shirt larger body before, especially in the butt, to hug the body clothing designs without a fit waist. Skirt cut narrower. Body shirt was cut short gradually from this period. Neck started up, while bears are lower down.

Frock changed much in decades 60. Busk because increasingly more popular, so long shirt may start fit waist, sometimes it is very quality, to respect your chest. Waist clothes elevation level crack populations. Bear clothes now cut straight across and long may close to my ankle. In 1960, because they want to see more women long, Ms. Tran Le Xuan set lounge to suit the boat.

Many people then the virtual machine with a long neck bore circle. To nearly 60 last decade, oriental robe mini becomes a habit. The flap may narrow and short when the knee. May oriental robe wider, not fit waist again, but remains on the eel body. Neck low down to 3cm. The sleeve also may spread to.

Especially in this time period, the oriental robe start cutting way to your chest and raglan sleeve kiss, less wrinkled, but with the cost of fabrics. The sleeve is connected to the body from the cross. Populations may bear with very long 60cm wide and up to the line two or three layers.

In 1975, the country’s best, the material is more difficult so long shirt with a simplicity. But these 90 years, Austria has a long back, to the more elegant and start international friends to think as a symbol of women Vietnam. In 1989, Women’s reports organized the first Miss Oriental robe. Six years later, the long blue lap of dress of Vietnam has the title “Home of the most beautiful traditional” in Tokyo, Japan.

The designers usually “experiment” with new types of fabrics, stranger types, the state’s ethnic minorities or may change the way features are cut by expanding the neck, reducing sleeves instead, or replacing the previous lap of the dress with the material than soft.

Unlike Kimono by Japan or South Korea’s handbook, Vietnam’s Oriental robe has also traditional to modern. Clothing for women is not restricted only to wear in some places or occasions that can wear everywhere, like work clothes, school uniforms, to wear or playwear to a guest of the page home.

The default page for this category is not redundant or the period, the accompanying wear simple: wear pants with a soft cloth or silk, under relics, wooden shoes or what shoes are, if you need solemn (as clothing for bridge) to the gown and the turban of traditional top teams, or Europe crown preferences. This is a special point on the first page of this tradition.

Many wedding dress patterns created tend to combine the wedding dress with long ethnic clothing. With two materials of silk and Voan, the Wedding oriental robe is the nation’s create stylized features gracious oilfield create looks soft, fragile. Stylized largest of the long wedding clothes shown in the flap (slim flap, soft more) and the neck. The general design of the shirt is a long-Wedding oriental robe ethnic gently but the period over which a little flap, collar and cuffs od trousers. 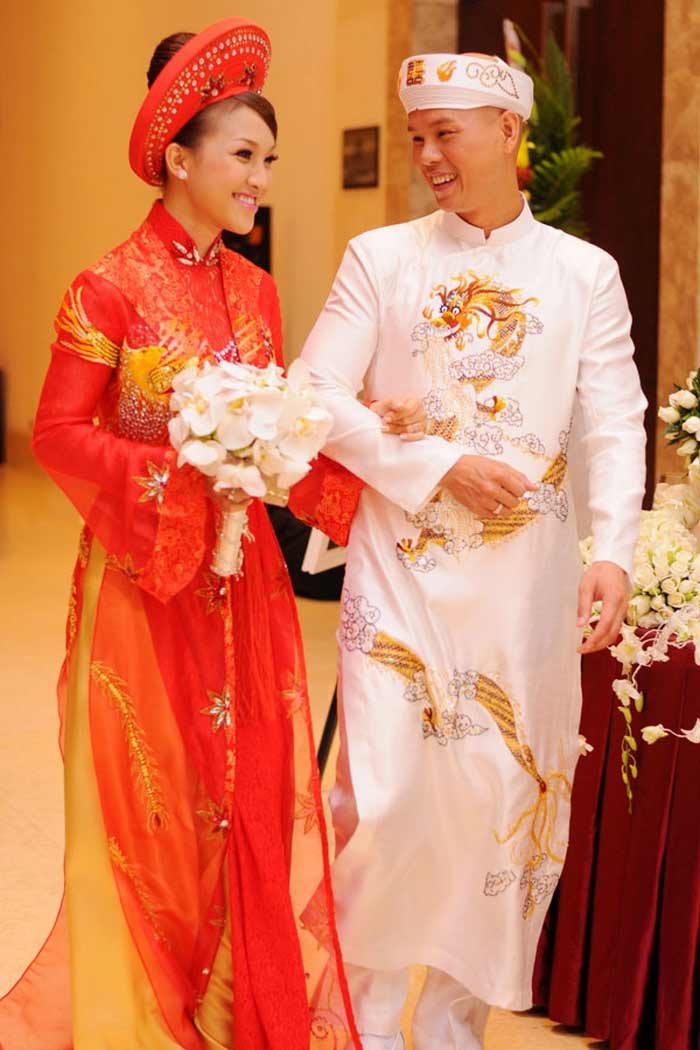 Oriental robe for a young married couple of Vietnamese tradition

Whether influenced by many cultures from the East to the West, still wearing long clothing lines to its own can not be confused with other designs.

The world only through the Vietnam war. But the millions who leave home to live in throughout the four has the heritage culture from the cuisine to the custom and that the traditional Oriental robe. All over the world, Oriental robe is not possible in a lack of festivals such as the Vietnamese Tet, Independence Day, 8-3 and more popular than the width of the fashion designer created 2 laps of dress become vogue.