Challenge Yourself with Coconut Worms: Benefits and Negatives sides of coconut worm You Should Know

Coconut is a key product that has many health benefits and nutritional values for the human body. It is becoming more and more obvious that this fruit, which grows on a palm tree, is important for diabetic patients because it lowers blood sugar. It also lowers body cholesterol and helps to replace blood plasma.

Coconut Worm is a significant contributor to the addition of proteins and other nutrients to the human body. This coconut worm has both positive and negative aspects. Here are some important details.

The larvae of coconut worms can turn into coconut beetles, which can live for up to three to four months. Coconut trees can be damaged by both larvae and weevils, but they are mostly worms.

The weevils create a barrier sound inside young coconut tops when they eat them, similar to the sound of a rice mill.

We have provided more information about their lives below. Please continue reading!

The female and male coconut beetles fertilize each other to produce eggs. The beetles dig holes in trees to lay eggs during the breeding season.

After spawning, the female secretes a gastric juice which helps to create a protective layer around the eggs.

On average, a female produces 210 eggs per nest. The eggs of coconut worm eggs have the following characteristics: They are round or oval in shape, white and glossy, approximately 1-2.5mm wide.

The egg’s back has a unique structure that helps to provide oxygen for the larvae.

The eggs will eventually hatch into larvae over time. These larvae are known as coconut worms and coconut weevils. They will consume and absorb nutrients from the soft coconut tree part to grow and develop.

The features of the larvae include: Coconut larvae have no legs and are white or yellow infancy, then they turn yellow as adults. The body is segmented with a small brown head. The maximum size is 5cm

Over time, coconut weevils will develop and eat the young coconut. They will then go into the trunk slowly. It will reach adulthood when it enters the next stage of its life cycle.

The coconut tree also provides the environment for the development of pupae.

Because coconut worms are best when consumed in the second or third stages, many people begin to use them for food as early as the third stage.

Step into the coconut beetle

The cocooning process is successful and the coconut weevil becomes a pupae. This will allow for more development.

Anyone who has watched the stages of butterfly growth will recall the moment when the butterflies emerge from their cocoons and begin to spread their wings.

The process is similar for the coconut weevil pupae; the young beetle also tears through the cover to escape.

Coconut worm is also known as palm tree weevil or sago worm. It is essential, and not the same as other insects.

It is certain that it is an insect species that provides a significant source of vitamins and minerals. Its body is rich in fat and oil, which can be extracted and used to smoothen skin.

It also contains calcium, which strengthens bones. Sago warm also contains a high amount of proteins (66.3%) that help to support the healthy growth of the body’s tissues and muscles.

Research has shown that the insect is similar to meat and fish in terms of nutritional content. This pest also contains ash, which is approximately 5.2%, and energy, which is 3.51%.

It is a staple food that is extremely nutritious and also provides income for many, especially those living in rural areas.

Negative sides of the coconut worm

Sago warm is a nutritious food for the human body but it can also be a pest. It boreholes in palm trees and date palms, resulting in their death.

This pest can decimate entire coconut plantations, causing food shortages and eventual starvation for people who rely on the coconut fruit as a source of income and food.

Other negative consequences can also follow, as the beauty of the beaches that are covered with palm trees and the monetary gain from the sale of coconut fruit and its products decrease.

This edible maggot is so disgusting that not many people will be able to eat it.

It has been shown that coconut worm is as nutritious as other animal products like meat and fish.

It has a medicinal value similar to coconut fruits, including improved insulin secretion and better absorption of vitamins and minerals.

This pest can be devastating to host plants, so it is important that you control it. The beauty of nature is much more attractive and offers more benefits than the edible maggot. It is therefore banned in many parts of the globe.

In Vietnam, the Mekong Delta region used to have coconut worms as tasty food. To protect the coconut trees and other members of the same family, coconut worms are not allowed to buy, sell or grow.

Coconut Worms are a pest that lives in coconut trees and is still being sold as food in Vietnam despite authorities’ efforts to ban them.

Coconut worm larvae can be used to make butter-, flour-, and even live dishes.

These dishes are extremely popular with epicures in Vietnam.

Once they become adults, however, coconut worms can be a real threat to the coconut tree. They fly from one coconut tree to another, puncturing their trunks and causing them to wither and eventually die.

We present the features of the worms and the food they eat to help guests who are interested in learning more about them.

Typical dishes made from coconut worms 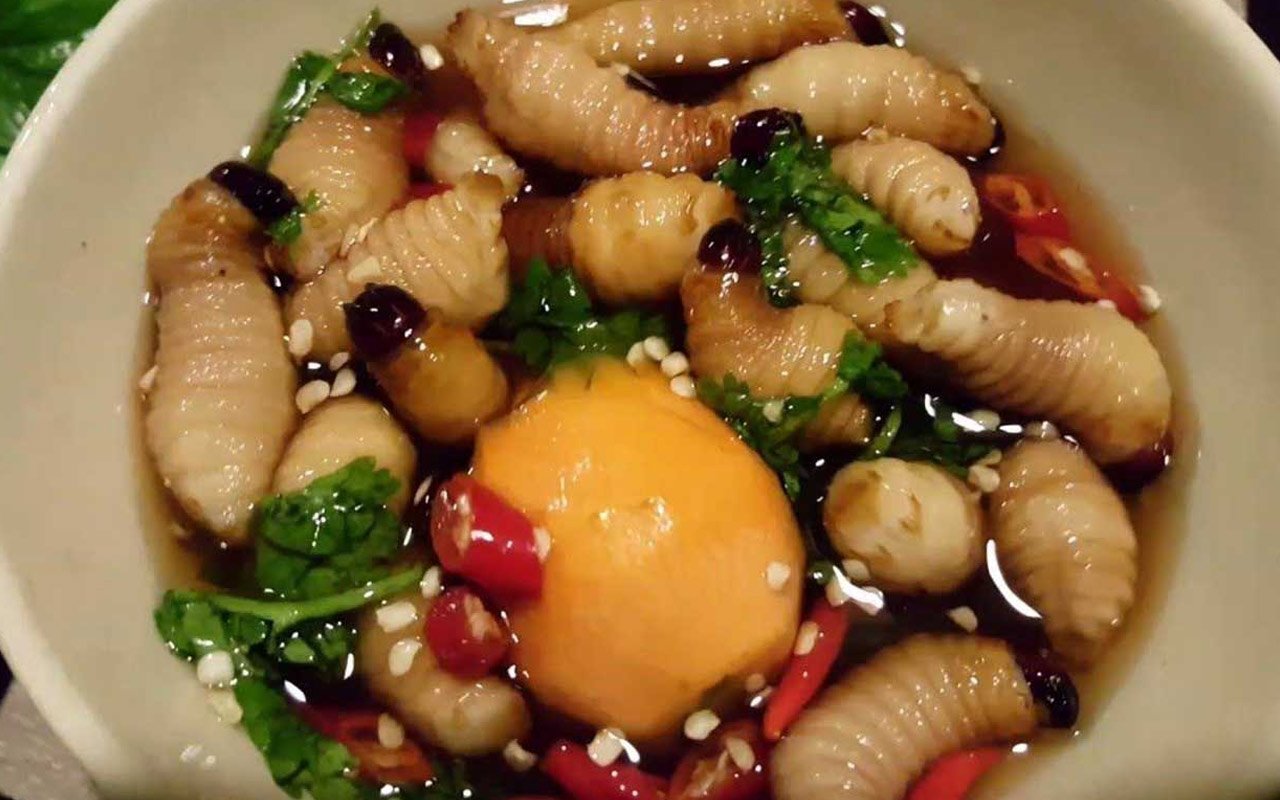 Some people use coconut weevils to make fish sauce. These are some of the recipes you can make with this particular type of ingredient.

Place the fresh worms that have been washed in a saucepan with the sugar, salt, and seasoning powder. This is similar to making silkworm pupae. This dish is often served with rice by many families as a savory.

After the pre-processing is complete, place a few peanuts in the body of the worms. Then, roll them through the mixture of flour, chicken eggs, pepper paste, and salt.

To make them more fragrant, fry them in a large flat pan. Let the oil drain and then eat coconut worms along with raw vegetables.

Baked with chili and salt

Coconut tree worms can be skewered into bamboo sticks and grilled on charcoal until golden. Then, they are rolled with vegetables like lettuce, tomato, basil, green chili, and then dipped in the tamarind fish marinade to enjoy.

This dish is often enjoyed with sweet-sour fish sauce and roasted chicken.

Coconut weevils are particularly vulnerable and require a meticulous process.

This helps to clean and soak the spices. It also prevents the worms from escaping when they are cooked.

This porridge is often used for improving health and vitality.

This is a way to eat fresh worms, also known as coconut weevils that swim in the river. This is because fat worms are able to swim in spicy chili fish sauce.

Many guests don’t feel comfortable eating it raw. However, the dish is high in nutritional value.

You will feel strange sensations when you chew the live weevil.

After boiling in fresh coconut water, the young weevils are extremely fragrant and fatty.

You can make this dish by rolling it with traditional herbs and wrapping it with thin rice paper. Then dip them in fish sauce with lemongrass, minced chili, or other ingredients.

This salad is made with the young coconut buds located at the top of the coconut tree.

The chef cuts the bud into small pieces and mixes them with bell peppers green onions lobster meat or shrimp meat, crispy shrimp puff cake, and other ingredients.

Combine all ingredients with mustard, vinegar, and olive oil. Place the mixture on a plate and top it with about 50 golden-fried coconut worms.

Coconut worms can be a problem for coconut trees and other members of the same family. That’s why coconut worms are currently not allowed to grow, buy or sell.

Share. Facebook Twitter Pinterest LinkedIn Tumblr Email
Previous ArticleWhat is the average forehead size & How to Know If You Have A Big Forehead?
Next Article Are Cashews Good for You? Check-out 7 Powerful Health Benefits of Cashew Nuts for Men & Women

Can dogs get headaches and how do you know?

Are Cashews Good for You? Check-out 7 Powerful Health Benefits of Cashew Nuts for Men & Women

Bean Sprouts: Nutritional Info, Health Benefits, and How to Make It

What Toxins Can Cause Seizures in Dogs?

6 Ways to Boost Immunity during Pregnancy in Covid-19

How does COVID-19 affect cancer patients?