Epilepsy is a disease that can occur in any breed of dog and at any age. Convulsions in dogs are temporary involuntary disturbances of normal brain functions that cause the muscles to function uncontrollably. Occasionally, you may see a dog suddenly bite into the air or try to bite his tail. Is that he’s having a seizure? And what does epilepsy in dogs look like? Causes and treatment when a dog has a seizure? Read this article to the end to better understand epilepsy in dogs.

If your normally happy dog suddenly becomes unsteady and confused, then he falls to the floor. Although it is not aware of what is happening, we look as if they are stepping on water. Exactly, the dog is having a seizure. Why is this happening, and what can you do?

If your dog suffers from this often, it may have a seizure disorder. Another name for that is epilepsy. Episodes of abnormal, uncontrolled electrical activity in the dog’s brain cause seizures, affecting their behavior and behavior.

The convulsions can resemble convulsions or uncontrollable shaking and can last from 30 seconds to several minutes.

In this article, we will learn about the symptoms of seizures in dogs and how to handle them safely.

Causes of Seizures in Dogs 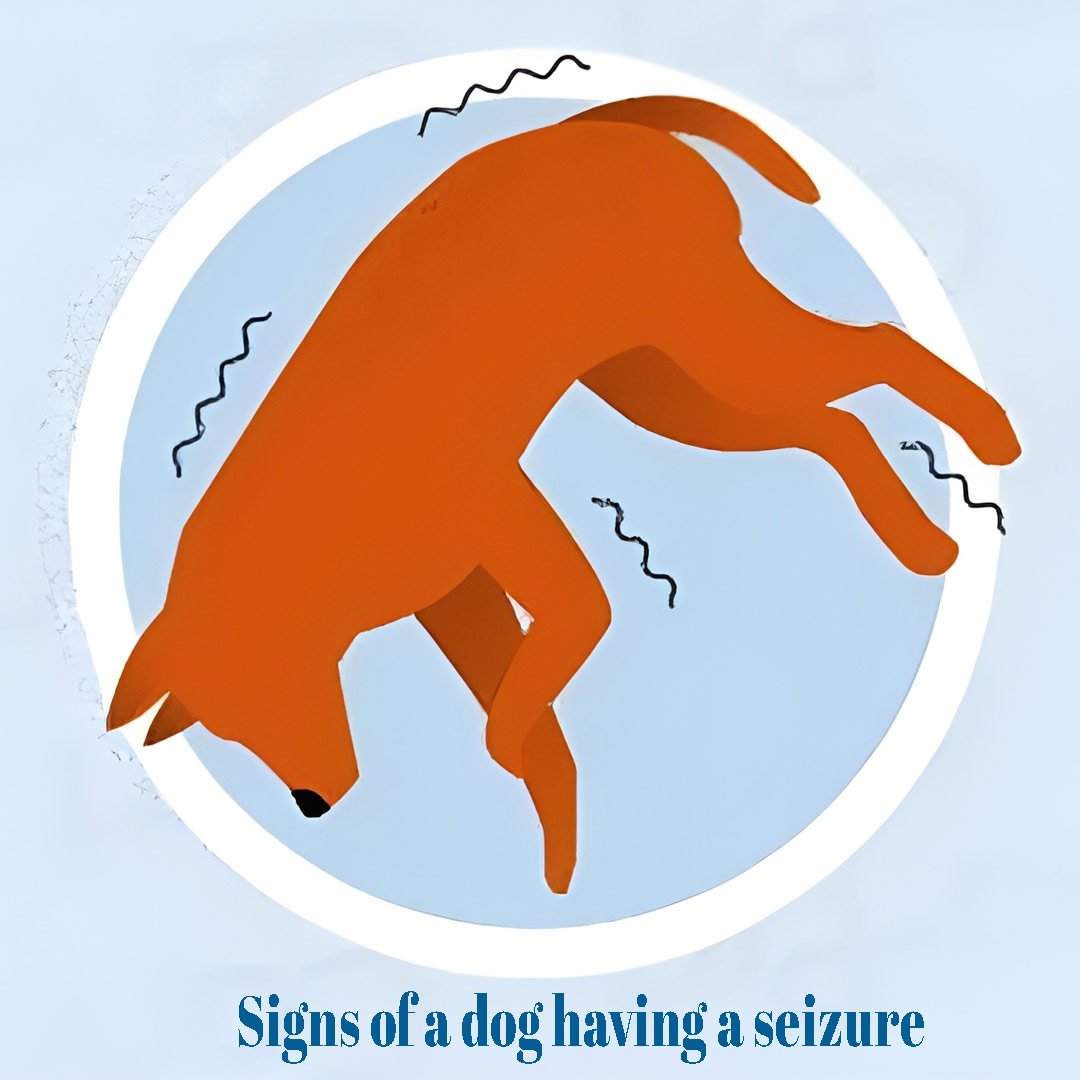 There are many causes of seizures. From causes of brain-related injuries such as brain tumors, and brain trauma, to pathological or toxic causes. Pathological causes that can cause seizures in dogs include liver disease, hypothyroidism, hyperthermia (with fever), hypoglycemia, or hypocalcemia. Intoxication can also be a cause of seizures as ingesting toxins, most commonly eating chocolate or foods containing caffeine.

Here is the list of common causes of seizures in dogs

Symptoms of Seizures in Dogs

The symptoms include: collapsing, stiffening, muscle twitching, loss of consciousness, drooling, tongue chewing, and foaming at the mouth. Dogs may fall to their sides and make paddling motions using their legs. During a seizure, they may poop or pee. They also are not aware of their surroundings.

According to the location and extent of abnormal brain activity, doctors classify seizures as focal or generalized. If the cause of the seizure is not known, seizures may be classified as of unknown origin.

Dogs may appear confused or dazed before having a seizure. Your dog might become disoriented, wobbly, or temporarily blind after a seizure. They might walk in circles or bump into objects. You might notice a lot more drool on your chin. They might try to hide.

If you are wondering what a dog seizure looks like, then this video can show you all stages of seizures in dogs

In addition, a seizure in dogs can cause one or more of these symptoms

Convulsions and seizures in dogs cause the muscles to contract and relax rapidly for a short period of time. Depending on the severity of the seizure, the dog may lose control of its body, which can frighten you.

However, most seizures in dogs are rapid and not life-threatening. If seizures last too long or happen frequently, they can be life-threatening, and you need to take them to the vet right away.

Based on the dog’s symptoms, we can divide it into 3 main types of seizures: focal (partial) seizures, generalized (grand mal) seizures, and focal seizures with secondary generalization. If you EEG the dog during a seizure, the main difference between the two is that the electrical storm occurs everywhere in the brain or in a specific part of the brain.

Grand mal seizures are the most common form of epilepsy in dogs, consisting of seizures and loss of consciousness, and can last from a few seconds to several minutes. All parts of the brain are affected.

Currently, the exact cause of generalized or grand-mal seizures is unknown. However, the most common cause of seizures in dogs is a genetic disorder known as idiopathic epilepsy. Other possible causes of generalized epilepsy are brain injury, poisoning, brain tumor, kidney failure, or liver disease.

The most recognizable sign of generalized canine seizures (Grand Mal seizures) is a loss of consciousness in which the muscles contract.

If the convulsion occurs for a long time, the dog may urinate or defecate indiscriminately, and other manifestations that may occur when the generalized seizure occurs are leg jerking, and jaw clamping.

If the seizure is severe, the dog can take a long time to get up, become disoriented, go blind, or even die.

The two drugs most commonly used to treat grand mal seizures in dogs are phenobarbital and potassium bromide. Newer anticonvulsants, such as Zonisamide, Levetiracetam, Gabapentin, Keppra, and Diazepam are being used more commonly.

Partial epilepsy can sometimes be dangerous for the dog’s owner or those around him when the dog has a seizure. Especially with complex partial epilepsy.

Complex partial seizures are called psychogenic seizures because of the dog’s aggressive manifestations and loss of conscious control. This is a form of convulsion in dogs that is most dangerous to the owner or the pets or people around them.

The most common type is a generalized seizure. Also known as a grand mal seizure. Dogs can become confused and lose consciousness.

This abnormal electrical activity occurs throughout the brain. Generalized seizures can last anywhere from a few seconds up to a few moments.

A focal seizure is an abnormal electrical activity that occurs in one part of the brain. Focal seizures can lead to unusual movements in one limb or one side of your body.

A fairly common type of focal seizure is a Fly-biting seizure. The manifestation of this type of seizure is that dogs often bite into the air as if they are biting flies the air. These seizures often come on suddenly and go away quickly. They can happen at any time, including when they are resting or relaxing.

They may last for only a few seconds. They can be focal at first, then generalized. Often the seizures are intermittent or cyclical. If the seizures occur more than once in a 24-hour period, they are called cluster seizures in dogs.

Large breeds are more likely to have cluster seizures at regular intervals of one to four weeks than small breeds. Cluster seizures that occur regularly over a period of 1 to 4 weeks are immediately thought of as dogs with established epilepsy.

Psychomotor seizures in dogs (also known as complex partial seizures) are focal seizures in which the seizures look more like a bout of abnormal behavior than an actual seizure. the. Because these seizures in dogs last only a few minutes. The dog’s consciousness is disturbed by this type of seizure when the dog appears to be hallucinating or in an altered state. The dog may suddenly attack an imaginary object such as jumping into the air or chasing its tail. It can be difficult to distinguish psychotic seizures from odd behaviors, but a dog with complex partial seizures will always do the same thing every time they have a seizure.

Focal seizures are usually treated with medication and sometimes with diet, nerve stimulation, or surgery. If seizures are caused by scarring or other damage to the brain, surgery is the most likely option.

The drugs most commonly used to treat partial seizures are Carbamazepine (Tegretol and other brand names) and Lamotrigine (Lamictal). Other possible medications include valproate (Depakote), topiramate (Topamax), gabapentin (Neurontin), and oxcarbazepine (Trileptal).

Although it can be difficult to distinguish between psychomotor seizures and other odd behaviors, a dog with them will do the same thing every seizure.

Idiopathic epilepsy is a condition where seizures are caused by unknown causes. These seizures usually occur in dogs aged between 6 months and 6 years.

While any dog can experience a seizure at any time, it is more common in Labrador retrievers, Australian shepherds, beagles, Belgian Tervurens, collies, and German shepherds.

What should I do if my dog has a seizure?

A diet that provides enough medium-chain fatty acids may reduce seizures in some dogs.

If the dog is experiencing a seizure, remain calm and watchful. If possible, find ways to reassure and keep your dog as calm as possible by speaking softly and comfortingly, or perhaps touching or petting if they are not overly aggressive or dangerous.

You can gently slide your dog away from any objects that could cause injuries, such as stairs or furniture.

Avoid touching your dog’s head and mouth if he is out of control or overly aggressive. They could bite you. Do not put anything in their mouths. Dogs can’t bite their tongues like humans, so you don’t have to worry about them choking on their tongues.

Your dog may overheat if the seizure continues for longer than two minutes. To cool your dog, turn on a fan and apply cold water to its paws. When the seizure is over, call your vet.

Dogs that have seizures lasting longer than five minutes or are unconscious for several consecutive seconds should be seen by a veterinarian immediately.

Dogs may experience breathing difficulties if their seizure continues for too long. This could increase their chance of suffering brain damage. To stop seizures, your vet might give an IV Valium and a dose of dog seizure medication to your dog.

Can dogs get headaches and how do you know?

Cute Animals: 100+ photos of cutest pets to cute dangerous animals around the world

The 17 Ugliest Species Of Ugly Animals, With Pics

Everything about Vietnamese mossy Frog – The #1 Masters Of Camouflage

Catahoula Leopard Dog: Everything You Need To Know

In the early 21st century, any visitor who does or Saigon to Ha Noi for the first time were impressed by the dense traffic in…

Hoi An – The peaceful city

Top Delicious and Healthy Stone Fruits and Their Benefits

Divorce puts your heart at risk

Get Rid Of Hip Dips Is Not Rocket Science! Read on to find out why

Do dogs get tired of barking and what to do to stop it?